On my 2010 June California tour, my old pal Brent Carpenter shot a “Tall Texas Tales” promo video for me in his LA studio. Just click on the link below, and it will take you to the video. Brent has worked with me on three other music videos, two of which won a total of eight Emmys including Best Editing and Song Of The Year. He is a TV/film editor, producer and writer, but his favorite job is being Ringo Starr’s personal videographer. In the pic below, Brent is in the right corner with the camera filming Ringo, Charlie Watts and Jim Keltner. Pretty heavy company for a hillbilly pal of mine. A bit closer to home…Brent recently shot a video with Ray Wylie Hubbard similar to this one he shot with me. He gets around 🙂 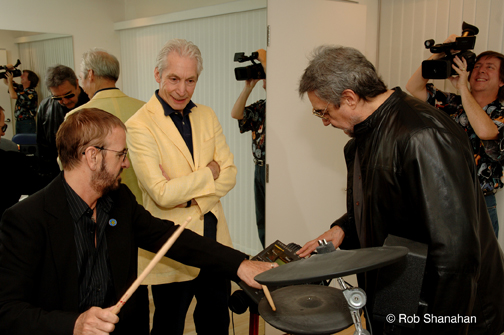